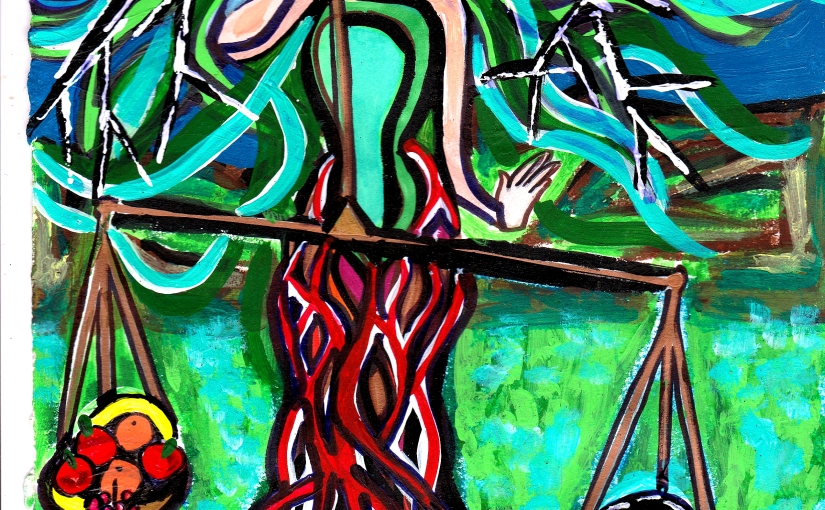 This piece is a reflection on Mother Nature, Lady Justice, Demeter the goddess of the harvest and agriculture, Goddesses of death and the underworld such as Coatlicue, Mictecacihuatl, Nephthys and Persephone.

The giver of life and the carrier of the burden of death is how I see and portray my symbol of “Mother Earth”, she (unlike myself) can give life to anything and does so – with no pain relief, no support, it is simply her obligation to continue our species. With Mothering comes abandonment – for her strength is not in the nurturing it is in the facilitating of life. Feeding you when hungry or starving you when she wishes, giving you shade as well as ripping away all that comforts you.

To her life and death are justice, it a natural order or law which aligns us within the universe. Life and death obviously exist and she reminds us of this, with the scale tipping slightly lower for death – indicating how death is a consequence for living.

The devouring Mother who both produces and destroys everything is like our earth, like our solar system, our galaxy , our entire universe. However the representation of her as female is an interesting depiction, in most mythology goddesses and deities are depicted as troublesome but still have a complex persona which is shown through various symbolic personality traits, showing strength, virtue, rage, love and of course the most important of roles, the creator of life and nature. Matriarchal societies are prevalent in mythology, although they have been disputed to have ever existed in history as a female led society or civilisation. Patriarchal rule and ownership of women is the reality, making these mythological symbols even more important.

Depictions of women for most of our history as a species have been of the virgin, mother, obedient wife, whore, witch or old crone. With each woman being a one dimensional character, with no complexities or ambition. They were not even elevated as “creators of life” instead treated like cattle or a conveyor belt of babies.

Women can be anything and everything just as men can be, gender as a concept rather than a biological definition is on its way out. So these figures that we create and lift up – they must be more than just the roles assigned to us from birth, this earth needs all of us to be creators, destroyers, givers and takers. That is the essence of all existence – here today gone tomorrow, death does not discriminate even if you have the privileges that afford you a longer life, you will still die and return to the earth.

For more information on my art or if you wish to give feedback, please fill in this form below: