Borderline Personality Disorder is a complex and severe mental illness which Charlotte Farhan has and still struggles with on a daily basis.

Having been diagnosed at 18 after displaying signs as young as 15 Charlotte did not understand or even know what this “disorder” was? It was only in her late twenties when she was unable to rely on drugs, alcohol and reckless behaviour to mask her inner turmoil and just blamed her lifestyle for her behaviour. As well as self denial there was no information or treatment offered to Charlotte so she just swept it under the carpet with her PTSD and Dissociative Disorder. However all this sweeping just made her mental health worse and soon she started developing more mental illnesses due to the avoidance. Now having agoraphobia, Generalised Anxiety disorder and OCD as a consequence adopting unhealthy ways of coping with her pain and instability.

Charlotte has been using art as a therapy since being hospitalised in a psychiatric unit at the age of 15. Although stopping the practice during her avoidance phase, Charlotte still used some form of creative therapy: writing poetry and journaling when unable to afford painting materials. Saying “I could always find a piece of paper and a pen, allowing me some freedom of mind”.

“Now I use my art in all its forms to express my journey and how BPD affects me, allowing more dialogue and engagement regarding this misunderstood illness as well as inspiring others to talk about their own experiences and hopefully encourage people to use a creative outlet when managing their illness or aiding in recovery”.

This is my collection so far…

All art by Charlotte Farhan 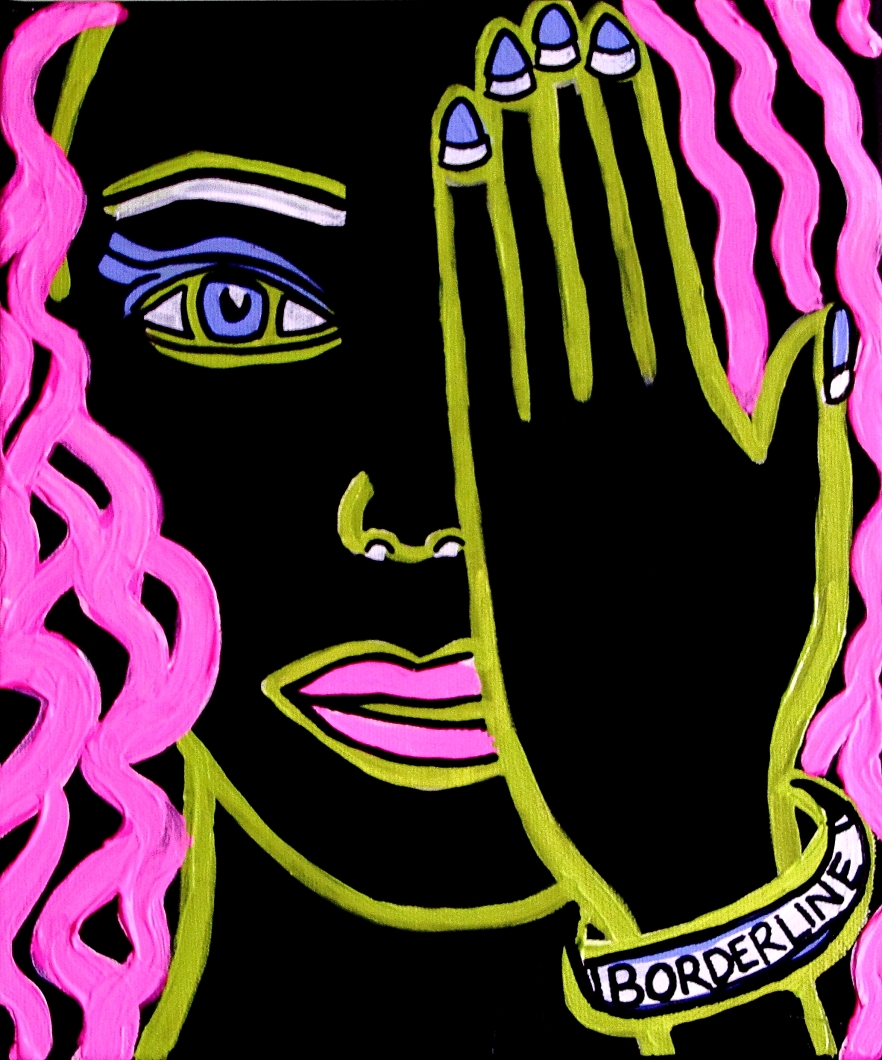 Obstructive – By Charlotte Farhan
Suffering from Borderline Personality Disorder is an ordeal on the best of days. BPD can cause obstructive behaviour due to it being a wildly misunderstood illness. This has lead me to hide my BPD from physicians and at times begrudge therapy, medication and leave mental health services. From the age of eleven I have obstructed treatment and then craved a cure, feeling abandoned and hateful towards the continuous changing of physicians and facilities.
My art is here to break down and challenge stigma as well as educate. 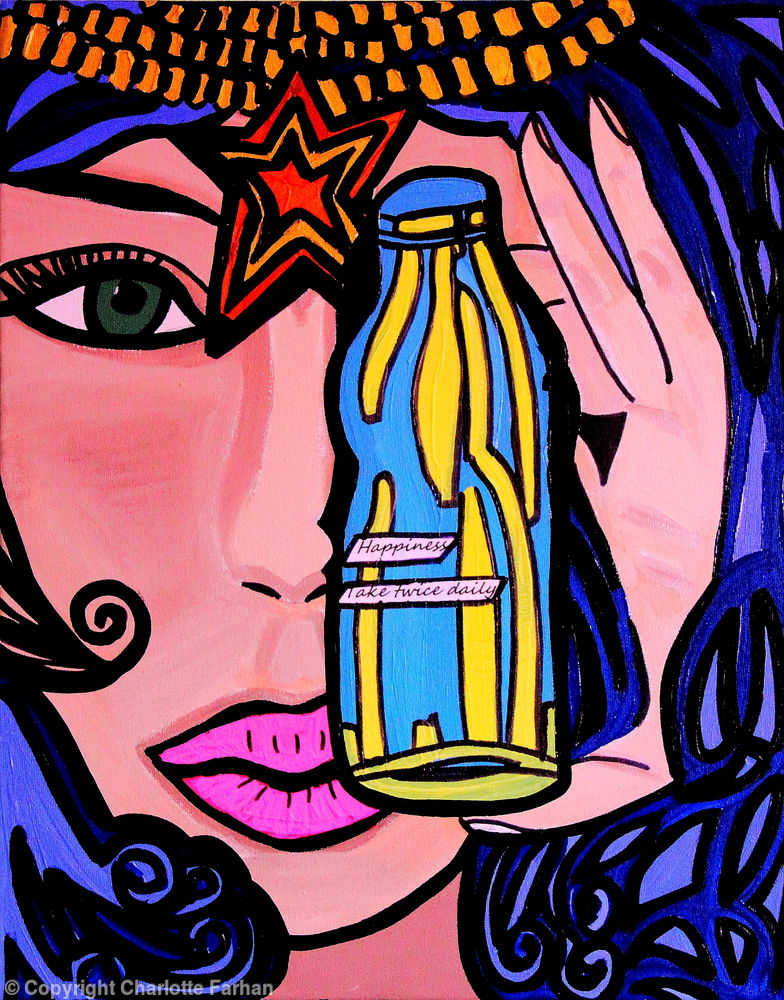 Belief In The Impossible – By Charlotte Farhan
A reflection and self portrait of the Struggle For Happiness and the conflicting ways in which things have helped my mental illness through religion, philosophy, spirituality and the battle with medication and treatments. Asking myself “Is Happiness Possible without a magic potion of sorts”? 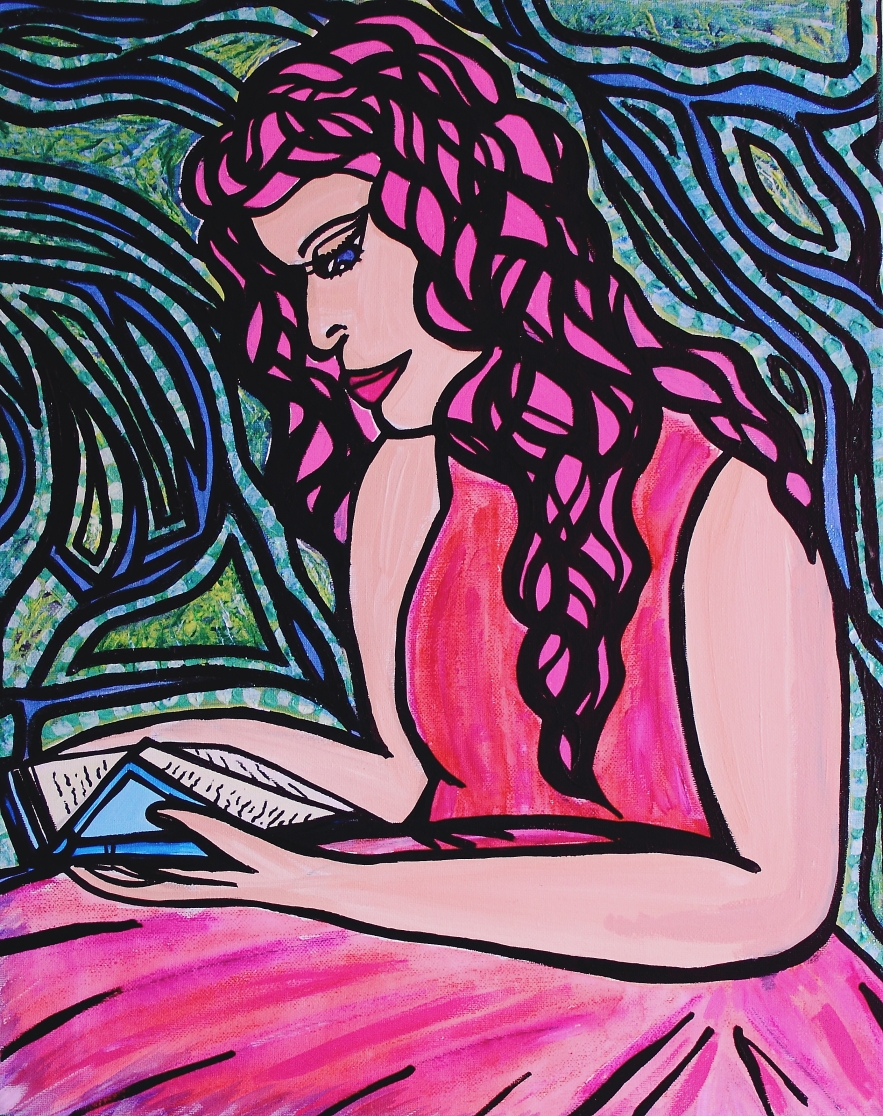 Escapism – By Charlotte Farhan
Having been described as a dreamer all my life I have always had an escape to another world. I have a condition called depersonalisation due to my PTSD and Borderline Personality Disorder. It is considered an anomaly of self-awareness. It feels like you are watching yourself act. Feelings of identity change, and that the world around you has become vague and dreamlike. With nightmare scenarios such as everything feeling less real, or lacking in significance. But for me it is an escape from the reality and memories of my abuse. childhood and trauma. It reminds me of Alice in Wonderland, I feel like her sometimes, this is my representation of this. 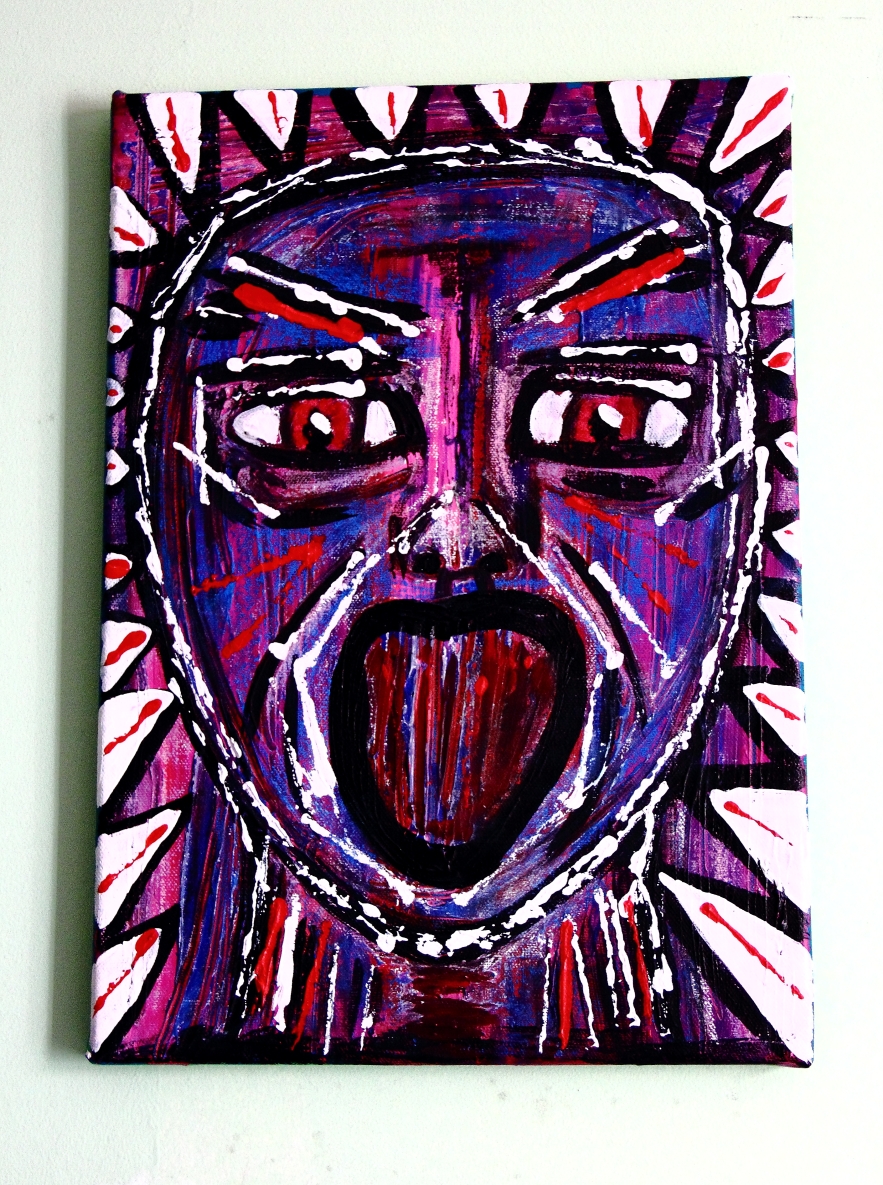 What you cannot see – By Charlotte Farhan
As a Borderline I spend an intense amount of time suppressing emotions. People often say to me after I have had an outburst, “I did not realise you were feeling so emotional and unwell, you looked fine to me” This is due to the combination of having had to be strong and resilient through major abuse and trauma as a child as well as being ridiculed and scolded for displaying extreme emotions as an adolescent. So I developed an emotion regulation strategy.
This painting is of the emotions people don’t see.
My art is here to break down and challenge stigma as well as educate.
.