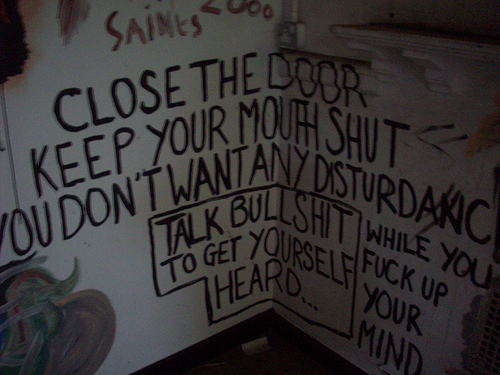 It is that time of year again – All Hallows’ Eve.

Halloween is upon us and has been all weekend, it is a celebration, a ritual and a chance to party with friends, adorning costumes and different personas for one night. With the nights drawing in and winter fast approaching it reminds us of the dark and in turn the dead.

However Halloween has become a mass capitalised practice, with shops and establishments enticing you with their decorations and latest gimmicks from the beginning of October. Making plans for this one night affair becomes about popularity and with the addition of social media – a costume contest is held with hashtags and a one-upmanship mentality.

Although this is not the scariest thing about Halloween, in fact the most frighting of attitudes and beliefs come out to play during this festivity and that is the representation of mental illness and the mentally ill. With depictions in horror films, on TV and in literature – as well as costumes depicting “psychiatric patients” or the idea of insanity being cool or glamorised.

As some one who has sever psychiatric conditions and who has had these since being a child, my thoughts on this subject are something I wish to be heard on, hoping that listening to someone who is actually mentally ill, who has been hospitalised in genuine Victorian asylum buildings in the UK, as an inpatient on a psychiatric ward, that in hearing me you will understand that my suffering, trauma, illnesses and identity is not something you get to “have fun with”. You don’t get to put it on for the night and then take it off without hearing me tell you that this is causing me and people like me to be demonised, you continue our persecution and discrimination. Whimsically you step into a piece of clothing which represents people who have been killed for their disabilities, locked away and forgotten about due to their illnesses, and tortured or experimented on because they behave and think differently to the perceived average person.

Having been stigmatised and labelled as dangerous to others, as a person who is violent or unstable – a person to be feared, a monster. I myself, have believed these things to be true, having allowed myself to be shamed into submission, thinking that in fact I am a scary, crazy villain. So I hid from it, allowed myself to be silenced, accepted family and friends stigmatising me with their fancy dress and in their language when watching horror films. Listening to people discuss my situation as frightening, something which scares them so much they can’t watch.

In the depictions of mental illness within horror films and on TV sometimes I catch a glimpse of myself, in a girl who is screaming manically and bashing her head against walls, or rocking herself in a corner or strapped down sedated in a hospital bead. I have lived these experiences, I still do sometimes. The rocking myself is a self soothing, allowing me to keep myself safe.

Yes I have done this in the dark, on a psychiatric ward – yes it was scary.

But not for you! For me!

When experiencing psychotic episodes I have smashed my head repeatedly against walls, on tables anywhere I could. As I rarely remember my psychosis or at least only fragments of it, I can not tell you exactly what I was thinking – but I can guess with almost complete certainty that it was to stop the intrusive images, the voices, the flashbacks, the pain… It was not because I was possessed or dangerous to others it was because of my neurological damage due to early childhood trauma. Which again is not scary in the spooky horror sense when explained, it is in fact a medical condition and symptoms.

Being in a psychiatric hospital is not a horror fest or a sensationalised attraction to experience. It is like any other medical facility, it is there to treat people with illnesses in a focused in-patient manner. Yes the Victorian buildings were scary and yes me and my in-patient friends would tell ghost stories and scare ourselves whilst walking through the abandoned buildings and grounds – but we didn’t think we were the monsters, we knew we were thought of this way by the outside world.

However we had seen real horror, most of us having survived childhood molestation, violence, and emotional abuse. We knew we were only really a danger to ourselves, hacking away at our own flesh daily, burning ourselves with lighters, putting ourselves in danger as vulnerable people, not eating, taking substances to excess and attempting to kill ourselves often. We were the scariest thing around – to ourselves, but are we really people to be feared? No – we are people who have been vilified in order to hide the realities of true horror, which happens everyday in plain sight, by people you know, people you forgive and people who you look up to. Our ideas disturb the status quo and our sadness gets in the way of the idealistic idea of living a happy life. We make you uncomfortable – because deep down you know we are not different, that you could become ill or have a breakdown. Your neurology is not bullet-proof. We are not made of weaker stuff.

So I ask you to think about the depiction of mentally ill people at Halloween, I ask you to challenge your thoughts on what we look like, act like, or are capable of. Think of the backstory of a character and realise just how un-scary someones emotional distress, neurological condition or neuro-divergent ideas are in context. Think how you may make someone you know feel – who has mental illness, when you dress up as a deranged “psychopath”. Don’t contribute to this stereotype and the discrimination it allows to continue. 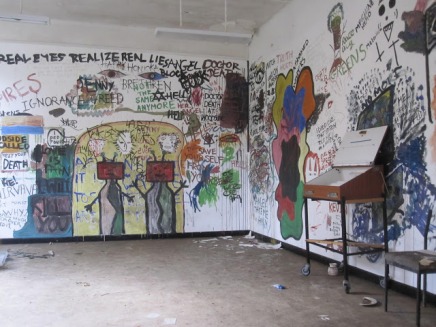 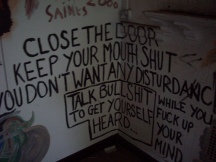 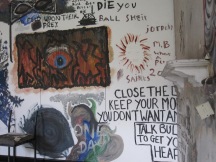 (These images are of graffiti myself and other in patients did in abandoned rooms during our stay at Woodside adolescent unit at West Park Hospital in Epsom, England in the summer of 1999 – during art therapy sessions. These photographs have been taken by people who site these as disturbing images of “crazy”impatient scribbling. I see them and remember letting out our pain, me and my best friend Jenny (who took her own life years later), of us together – expressing ourselves through art, this is NOT a horror movie scene or anything sinister.)