Do you reinforce the idea of the Rape Myth?

Living in this world as a victim who survived sexual violence, assault and child molestation I have had to learn from an early age that the systems of power and society are against me due to my gender and mental illness. People speak of you with either a perception of doubt and contempt, a whispered shamefulness – or deem you as a broken shell of a human, with no use; it makes people uncomfortable. These people are the ones that if they read or see a depiction on film/TV similar to your situation, will dissect and find a way to blame the victim, even when it is a child, they do this in front of you – holding on tightly to the idea of the “Rape Myth“. 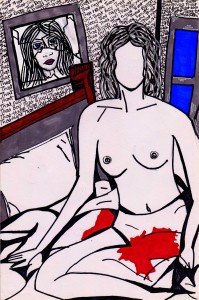 That night, that house, that girl, that room, that boy, that blood –
By Charlotte Farhan

Perceptions of rape and any form of sexual assault or abuse are somewhat still judged by our prehistoric natures, along with murder – this need to defile and desecrate another human is sadly a behaviour which seems to be harder to evolve past. However even though there are sociobiological theories of rape which have been heavily criticised for assuming that only young attractive women are raped or that rape is motivated by desires and sexual needs only; is why this research needs to be considered but not seen as a completed study. We can not argue that rape has been used as a tool by our species. With high status and powerful males enslaving women as their playthings throughout history, with rape being used as a weapon of war to ethnically cleanse or to humiliate the opposing combatants. However the question which seems too complex to answer is whether this is something our species has innately, or is a behavioural component, which due to our long history of patriarchal power has never been challenged – until very recently, as more and more women are emancipated from their male family members.

So why is the “rape myth” still so prevalent today?

This month has been very triggering for most survivors, with Donald Trump admitting he has sexually assaulted women, with Brock Turner being released from his pitifully short sentence and with Ched Evans being acquitted after his family paid £50,000 for information from past lovers of the victim and then brought forward two ex partners and using the victims previous sexual behaviour against her in the case. These three high profile examples of how our world is determined to reinforce rape culture, show that power, privilege and using a woman’s sexuality to discredit her, are all achievable ways that men and boys who have never challenged these archaic ideas can “get away with it”. That they can be given the impression, it is their right, that their future is more important than a girl or woman’s or that women can’t be trusted especially if sexually active. 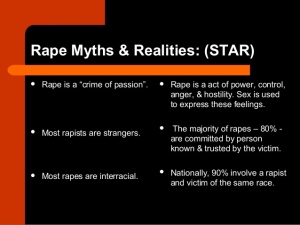 When I was raped at 15 by a boy in my school, many things were used against me – this was back in 1999 in England and even though I had a lot of evidence against him, still it was much more “prove she is not credible” rather than “prove he is guilty”. The fact I had fancied the boy was a big thing used against me, which as a child myself became confusing – when people repeated this to me again and again;

“but you fancied him, you wanted him to fancy you”?

These things were true but did not cancel out the fact he violently raped me. It was 1999 and it was as if people had not ever challenged the idea that:

1) rape has nothing to do with being attracted to someone

2) you can’t be raped by someone you fancy, which as an adult, now – I have no problem understanding. I blamed myself for years, thinking

“it was my fault, I fancied him, so he had the right”.

However the most disturbing of “victim blaming” I experienced was that of my mental illness and disability being used against me – to discredit me by suggesting my ability to understand what happened to me was impaired or that I had done this to myself. Having been severally sexually traumatised vaginally and anally which meant I had to have internal and external surgery on my genital areas, it was clear to the physicians and police examiners that this was from forced aggressive penetration. However this was not what my rapists Mother said – who spread the false information that I had in fact self harmed my genitals to frame and blame him. This spread like wild fire amongst the students at my school, teachers and parents and due to my unstable mental health displayed in school previously – many just assumed this must be true about “that crazy girl”.

There are still people from my school year who are addiment I lied and that I did it out of some sort of “crazy” spite or something to that effect. But one thing has always bothered me about these people, they seem to accept that he was convicted for grievous bodily harm – that he beat me and cut me open with his force and violence, however this to them is not rape or sexual assault, this is fine, because I was asking for it.

Confronting my own Blood – By Charlotte Farhan

My rapist was not convicted of rape, the police told me that this was due to his age – as he was also 15 and the fact that they could not determine and prove a lack of consent (like with so many cases). So he was convicted of GBH and Unlawful Sex – he was put on the sex offenders register and was on a tag for 12 months, but this was still not enough regardless of the outcome for some. It did not matter that I was bruised, bleeding and emotionally broken ready to take my own life, to them I was a whore and an opportunist.

It took so long for me to accept my rape as rape – this was due to our culture, my upbringing and my age. Once able to detach the 15 year old girl from being the primary source of all my information on what happened to me, I was able to look at it with adult eyes, eyes which have now survived and lived.

It was only 2 years ago – having turned 30 and reaching the point that I had lived 15 years on from my assault, whilst doing intense reliving therapy for my CPTSD, that revisiting my memories voluntarily was possible – apposed to flash backs and intrusive thoughts. Through this new lens of awareness I saw 15 year old me held down (face down) crying into the sheets as the boy raped me or of myself choking from forced oral penetration, it was then and only then that all the other details fell away – what I was wearing, that I fancied him, that I had gone into the room voluntarily and that straight after it had happened I had told my friends we had just had sex, to fit in, as I did not understand what had happened to me. These details were not what happened to me, these details were from society’s ideas of girls and women – from a rhetoric that found me (the victim) more guilty than the perpetrator.

You Know You Want It – By Charlotte Farhan

The facts are – I did not give consent and could not stop what happened to me due to fear and force. That until you are in a situation like this, a rape – that did not happen in a dark alley by a scary man, but one that happened by someone you knew, liked or loved, it is then you realise how we do ourselves as a species an injustice. We do not prepare girls and boys for the real dangers – we are not taught about consent and of how important this is. Instead as a girl you are taught you must prevent yourself from being raped or targeted by men, that you are the only one in control of this. Or that you must defend yourself by carrying a weapon or whistle, your told “scream out”, or you are told “cover up” don’t give men ideas or an invitation. Boys are then treated as if they are less responsible when it comes to sexual behaviour, that promiscuity is acceptable and even encouraged in an environment of toxic masculinity, with the idea a girl or woman needs to be “ruined” or “broken in”, a sense of entitlement is continued and facilitated. All the while placing all people who identify as male in one patriarchal predatory box , a box – which if male and you are the victim of rape, then this is not taken seriously,  and is ridiculed or deemed to be a weakness, clamming “real men can’t be raped”.

Despite considerable research and publications in professional and popular journals concerning rape, such myths continue to persist in the minds of the masses.

We need to stop:

We need to look at rape as… well just that – RAPE!

People need to understand the fundamental differences between rape and sex and the need for children to be taught about consent couldn’t be more evident, along with the rest of sex education needing to be taught younger and more liberally. But how can you make a difference, simple check your attitudes and beliefs about what you have read and ask yourself:

Have you ever reinforced the rape myth? 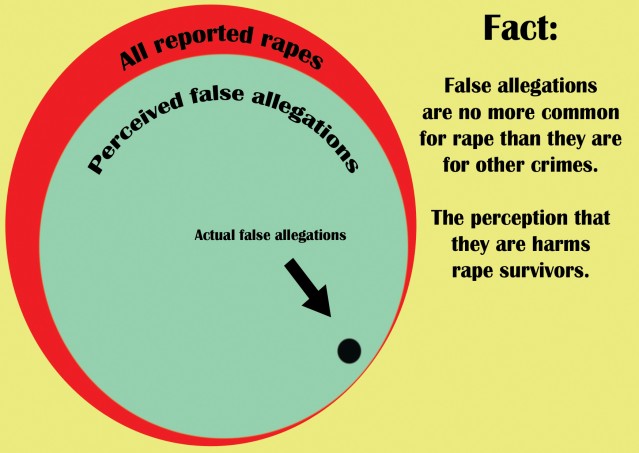 If you are a victim who survived sexual violence, rape assault or abuse and wish to get more advice or support here are some helpful links:

If you would like to give feedback, share your views or for any further information on my art, writing or Art Saves Lives International please fill in the contact form below:

By ArtSavesLives Charlotte Farhan
On October 26, 2016
Leave a comment