This piece of art is a visual representation of what it is like to live and suffer with complex post traumatic stress disorder.

Since childhood I have been repeatedly subjected to trauma, which went on into my adolescent years and then further into my adult years. As an toddler I was sexually abused by a family member, my Father suffered from alcohol induced psychosis and begun to act threatening and was a risk to myself and my Mother.

My Mother psychologically manipulated me from then until present day – through gaslighting, with emotional and narcissistic abuse. Abandoned on numerous occasions by both parents, with my Father abandoning me completely by early puberty, and my Mother leaving me to fend for myself whist she was in hospital, at the age of 12 (with only an 18 year old lodger to look in on me, who was not well themselves).

Then at 15 I experienced a violent rape by a boy in my school, causing me to have internal surgery and being put into a psychiatric hospital, where I was sexually assaulted a further 2 times by male inpatients. Abandoned once more by my Mother – whist in hospital experiencing one of the worst ordeals of my life. After leaving hospital the abuse from my mother continued, until leaving home at 17, from 17 until 26 drugs took over my life and whether illegal or prescribed a haze of denial took hold and saw reckless or complete social isolation as the two extremes I swung between.

Then at 26, upon seeing my rapist face to face I suffered a breakdown and have not fully regained control of my life since. With chronic illnesses and disabilities setting in from 28 onward, further isolation has occurred. The emotional captivity my Mother had me in was finally broken by myself last year (2015) when she asked to “have a break” as my dependency on her for help with my illnesses was too much for her, this – coming from a woman who used me as a care giver rather than raising me as a child, (as she suffers from co-morbid bipolar and BPD).

All the while stigmatised, marginalised and disenfranchised by teachers, doctors, nurses, therapists, social workers, employers and the higher education system, pushing me further down with no civil rights or options. This is how I developed C-PTSD. This is a short description – an outline of events, rather than the detail of all the encompassing experiences which led to this disorder.

Here is some information on C-PTSD:

Complex post-traumatic stress disorder (C-PTSD), also known as complex trauma, is a proposed diagnostic term for a set of symptoms resulting from prolonged stress of a social and/or interpersonal nature, especially in the context of interpersonal dependence. Subjects displaying traits associated with C-PTSD include victims of chronic maltreatment by caregivers, as well as hostages, prisoners of war, concentration camp survivors, and survivors of some religious cults.
Situations causing the kind of traumatic stress that can lead to C-PTSD-like symptoms include captivity or entrapment (a situation lacking a viable escape route for the victim), as well as psychological manipulation (gaslighting and/or false accusations), which can result in a prolonged sense of helplessness and deformation of one’s identity and sense of self. C-PTSD is distinct from, but similar to, post-traumatic stress disorder (PTSD), somatization disorder, dissociative identity disorder, and borderline personality disorder.

Repeated traumatization during childhood leads to symptoms that differ from those described for PTSD. Here are symptoms and behavioural characteristics in seven domains:

Seeking increased attachment to people, especially to care-givers who inflict pain, confuses love and pain and increases the likelihood of a captivity like that of betrayal bonding, (similar to Stockholm syndrome) and of disempowerment and lack of control. If the situation is perceived as life-threatening then traumatic stress responses will likely arise and C-PTSD more likely diagnosed in a situation of insecure attachment than PTSD.

If you have any questions on this piece or the issues raised please contact me via this form: 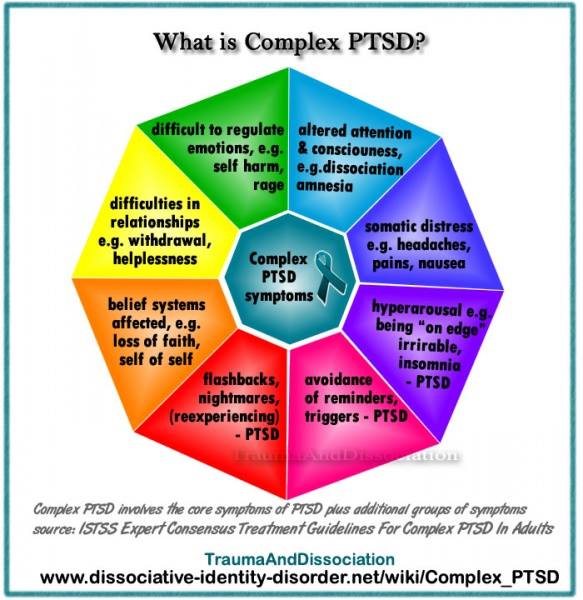