Stephen Fry, we the victims – who survived; are not taking your freedom of speech away, so please don’t silence our voices

This morning in a suicidal state of flashbacks and being locked in by reliving trauma, my eyes glanced over Twitter and saw that Stephen Fry was trending, so out of concern – immediately clicked the hashtag to see what was going on. Having admired Stephen Fry for so long, he has been someone I have followed and supported, he has championed open dialogue on mental illness, made me laugh, inspired me to take direct action and speak out about my own mental illnesses and trauma, as well as me wanting him to be my Father from a young age; as I saw him as a empathetic and caring man, which believe me; my Father was not.

I was a victim of child sexual abuse from the age of four to six, by a family member, I was raped violently at the age of 15 by a boy at my school, this resulted in me having internal surgery and being admitted to a psychiatric ward, in the psychiatric ward I was sexually assaulted twice by two different male patients.

As A Victim I Survived – By Charlotte Farhan

This is what Stephen Fry said:

“It’s a great shame and we’re all very sorry that your uncle touched you in that nasty place – you get some of my sympathy – but your self-pity gets none of my sympathy.”

The context to this was on censorship and “safe places” on the internet as well as Trigger Warnings.

Here is the full interview:

Regardless of the context the words he used are unacceptable, the stigma he has further created is appalling and the silencing of victims who survived is unforgivable. 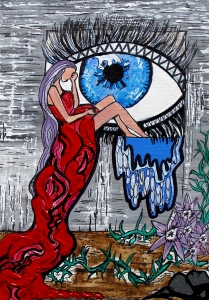 I Am Still Bleeding – By Charlotte Farhan

Freedom of speech and expression is something very close to my heart as a visual artist and writer, its importance is vital for knowledge, our evolving society and so that everyone can be heard. However it is not as simple as you being able to say whatever comes into your head and then being able to defend your remarks with the excuse of “freedom of speech”, it is far more complicated than this if we wish to use our enlightenment to progress as a better global community.

Now I know a lot about “safe places” and “trigger warnings” as a survivor – who speaks out and has a large following across platforms. With a great number of followers who are in recovery from sexual abuse, sexual violence and rape I am very aware of the dangers we face by being triggered. You see we suffer from PTSD or even C-PTSD (which I have) which means we are not 100% in control of our minds and behaviours, so when we hear or see triggers it could be enough to push us over the edge or cause ourselves harm. My latest art, poetry and writing is about my experiences as a victim who survived, I do not feel any censorship over my work just because I have added a helpful safety warning about possible triggers, giving my followers the choice.

Head on a Stick – By Charlotte Farhan

We have little choice anywhere in life as survivors, our minds are a continuous reel of pain and shame; rape and pedophile jokes are everywhere, people use the word rape in trivialising ways to describe normal day to day occurrences, such as “my Facebook was raped”; we see depictions of rape and incest being glamorized in film and on TV, we hear about it in the news everyday…

So when we wish to speak out about our trauma or read about someone else’s we should be able to use these helpful reminders and warnings without being persecuted further.

Being judged as self pitying children who need to grow up is exactly what we fear most when sharing our stories of survival.

I was a child when my abuse started – a four year old girl, this four year old girl is still alive inside me, she is still scared and feels so much shame, Stephen Fry told my little girl to “grow up”, he told all the children who are still being abused right now – to “grow up”. Something they do without choice far too early.

People are now worried for Stephen Fry as he is a Bipolar sufferer, people defending him and excusing his behaviour all because he is mentally ill, however – who is rushing to defend us? Most of us are not privileged to have such amazing private care as Stephen Fry does for his mental health, some of us are not fortunate enough to have loving families and friends who will take care of us, a lot of us are alone in this, today we feel even more isolated.

Being someone who suffers from a long list of severe mental illnesses I can assure you our mental health is no excuse for holding such stigmatising opinions. In trying to be “funny” Stephen Fry used his position and platform in the public eye to ridicule victims. With this he has exposed how rape culture is alive and kicking on this planet, how victim blaming is easier for people than empathy and kindness. That your right to offend and hurt others is more important to you than the safety of us. Is it really that awful that we add a trigger warning, does this upset you more than we the victims are traumatized. 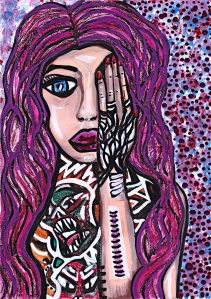 So upon reading Stephen Fry’s comments on how we should “grow up”, I have been triggered and it is my freedom of speech to say so!

Experiencing a relapse in my recovery recently, this is raw for me right now. My life is so hard due to my C-PTSD, I can’t go out alone and have not done so for 9 years, I have physical pain where I was violated, flashbacks, night terrors and so many more things which I don’t care to get into right now.

Now comments and attitudes which reveal the rape culture we live in – full of victim blaming and silencing, as people defend Stephen Fry (on social media and in the general media) is clogging up our screens, pushing us further underground but fear not as his “rights” (Stephen Fry’s) to take our lives into his hands is preserved, but our right to safe places isn’t, for fear of upsetting people?

Today has been made even harder by this, it will enter into the voices we hear daily in our minds, which muzzle us and tell us we are nothing but a burden.

Stephen Fry is the president of Mind the mental health charity here in the UK.